FOOTPRINTS IN THE SNOW 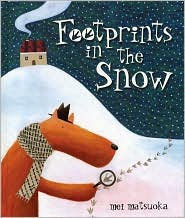 FROM THE FLAP: Wolf is feeling offended and indignant: all the wolves he’s ever read about are nasty, scary, and greedy! To set the record straight, he decided to write a story about a nice wolf. But will his wolfish instincts get the better of him after all?

Ask students to write an ending to FOOTPRINTS IN THE SNOW from the wolf’s point of view and another ending from one of the other animal’s points of view. If students are emerging writers, have them illustrate their ending and have them dictate the story to you.

Have students mount their stories from Excellent Endings onto white construction paper. Then have them stamp a border of footprints around their stories. If you don’t have stamps, use potato prints.

Talk about each animal in the story and about its diet. Create addition and subtraction problems such as: Five flies flew around frog’s head. Frog ate two. How many flies were left? Or, rabbit ate three carrots from one garden and five from another. How many carrots did rabbit eat all together? After doing many as a class, ask students to create their own math stories.

STEPS TO FRIENDSHIP (Interpersonal and Intrapersonal)

Wolf sets out to make friends, but he is unsuccessful. As a class brainstorm a list of things to say to someone when trying to initiate a friendship. The other animals weren’t friendly to wolf either. Brainstorm a list of friendly responses children can say when someone approaches them and asks to be friends. Ask students to trace their footprint, cut it out, and sign their name on their footprint. Post the prints around the room.

-My Lucky Day by Keiko Kasza
-The Spider and the Fly by Mary Howitt and Tony DiTerlizzi
-The True Story of the Three Little Pigs by Jon Scieszka
-Wolves by Emily Gravett
Posted by Kate Narita at 12:38 PM

Kate Narita
I am an author, curriculum guide consultant, and a teacher. Each week this blog features a Multiple Intelligences unit for the primary or intermediate elementary classroom based on a recently published children's book. Author interviews include information about the writing process and the Six Traits of Writing. Book submissions may be sent to 227 Mountain Road, Princeton, MA 01541. I cannot include every title, and I cannot return books. Preference will be given to books that correlate strongly with the national education standards. Only traditionally published books will be considered. If you have further questions, or would like to hire me as a curriculum guide consultant, please contact me at kate_tomATverizonDOTnet.